Dear students, here we are going to share Carbon and its Compounds class 10 PDF with you. In this post, we have provided a complete summary, question answer, and notes for this chapter 4 class 10th. The students who are preparing for the 10th class examinations can read complete chapter 4 here with notes. You can also check exam patterns, syllabus, short questions, and answers for this chapter here. Below we have provided the direct download link for Class 10th Chapter 4 Carbon and its Compounds PDF.

Carbon forms covalent bonds. Formation of covalent bond: Covalent bond formation involves sharing of electrons between bonding atoms which may be either the same or different.

Covalency: The number of electrons contributed by an atom for sharing is known as its covalency.

The property due to which an element exists in two or more forms, which differ in their physical and some of the chemical properties is known as “Allotropy” and the various forms are called “Allotropes”.

Catenation: The property of elements to form long chains or rings by self linking of their own atoms- through covalent bonds is called catenation. The extent of catenation depends upon the strength of the bonds between the atoms involved in catenation.

Word Root: A word root indicates the nature of the basic carbon skeleton. In case a functional group is present, it is indicated in the name of the compound with either as a prefix or as a suffix. 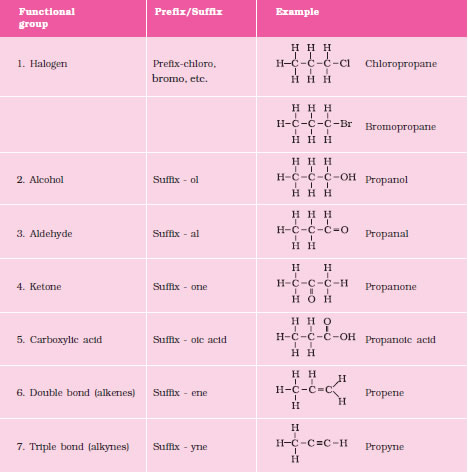 The substance which is used for oxidation is known as an oxidizing agent.
e.g alkaline KMnO4, acidified K2Cr2O7.
13. Some Important Carbon Compounds Alcohols: Compounds containing -OH group attached to a carbon atom are known as alcohols.
Example: Ethanol (C2H5OH): commonly known as alcohol.
Properties of ethanol: 1. Reaction with sodium: Due to its weakly acidic nature, ethanol reacts with sodium to liberate H2 gas.

Alcohol as a fuel: Alcohol (ethanol) is added to petrol up to 20% and the mixture is called “Gasol”.
Harmful Effects of Drinking Alcohol: If the alcohol used for drinking purposes contains some methyl alcohol (CH3OH) as impurity then it may cause serious poisoning and loss of eyesight.
It is habit-forming and damages the liver if taken regularly in large quantities.
Ethanoic Acid (Acetic Acid) CH3COOH:
Ethanoic acid, commercially known as acetic acid belongs to a group of acids called carboxylic acid.
Chemical properties :
(i) Reaction with a base :
2CH3COOH + 2NaOH → 2CH3COONaH2O
(ii) Reaction with carbonates and bicarbonates :
2CH3COOH + Na2CO3 → 2CH3COONa + CO2 + H2O
CH3COOH + NaHCO3 → CH3COONa + H2O + CO2
(iii) Reaction with alcohol : (Esterification)

Esters react in the presence of an acid or a. base to give back the alcohol and carboxylic acid this reaction is known as saponification.
You may also like:

Here you can download the Carbon and its Compounds Class 10 PDF by clicking on the link given below.